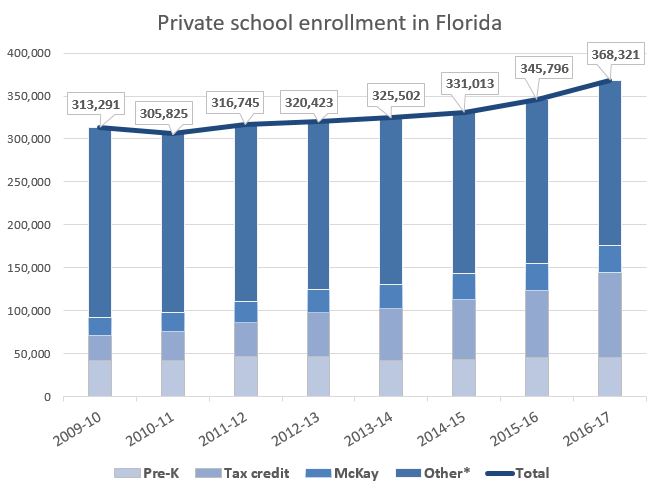 Enrollment grew by 22,525 PreK-12 students in the 2016-17 school year. That’s a 6.5 percent increase over the previous year and the second-highest enrollment growth since 2000. According to the new report from the Florida Department of Education, private school students now make up 11.6 percent of all preK-12 students in Florida.

Enrollment ranged from 0 students in rural Liberty County to 76,022 in Miami-Dade.

This marks the sixth year in a row of private school enrollment growth in Florida.

Florida’s school choice scholarship programs no doubt contribute to this growth. But for the second year in a row, growth in private school enrollment appears to have outstripped tax credit and McKay scholarships.

Once again, the Gardiner Scholarship, which now serves more than 8,100 students, saw the largest growth rate of any scholarship program. The program’s impact on total preK-12 private school enrollment figures remains unclear, however, as parents may use the funds to purchase full- or part-time private school educations or may even home educate their student, purchase therapies, tutoring or purchase college savings accounts.  Two nonprofit organizations — Step Up For Students, which publishes this blog, and the AAA Scholarship Foundation — help administer the scholarship accounts.

The number of private schools operating in Florida increased to 2,663, up 123 schools over the previous year. Of those schools, 1,712 participated in the FTC program and 1,454 participated in McKay (figures are not cumulative).

McKay and tax credit scholarship recipients make up 40 percent of all K-12 students in private schools, up from 36 percent last year.