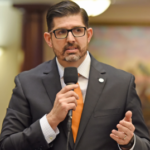 FORT LAUDERDALE – Too many schools pay all their teachers the same way. And that might be keeping talented people out of the profession, Rep. Manny Diaz, R-Hialeah, told a charter school gathering Friday.

Most districts rely on “step-and-lane” salary schedules that pay teachers based on their level of graduate degree, and increase pay with each year of experience. Florida’s foray into merit pay added teacher evaluations to the mix. That had limited effects.

Diaz, who chairs the House’s education budget committee, said the system doesn’t offer enough to young teachers with outstanding classroom skills or unique qualifications in demanding fields. Too often, he said, teachers are treated like one is as good as the next.

“You’re not making widgets,” he said. “They’re treated in a fashion as if they were labor workers in a technical industry. They’re not. They’re professionals.”

Diaz, a former public school teacher and administrator, said when top-performing young teachers prepare to start a family, they often realize there’s only one sure path to a big salary increase. They angle for administration jobs. Every time that happens, he said, “you’re taking the best person out of the classroom.”

He told the audience of mostly charter school leaders that they have the freedom to redefine compensation in their field. All-star teachers should be able to command salaries that keep them in the classroom for the long haul, he said.

“Across the board, we need to pay teachers a fair wage — public schools, charter schools, everywhere,” he said. (Update 10/23: Jones has filed teacher pay raise legislation.)

Jones said he was wary of a system where teachers in the same building would have to compete for salary increases.

But he also agreed teachers should have paths to greater pay and prestige that don’t take them out of the classroom.

He suggested a model that would allow classroom veterans to become “master teachers.” They could continue teaching, mentor less-experienced colleagues and get paid a premium for their efforts.