Hello again Florida. I’m glad to be “back” although still from a distance – a distance I hope that will continue to have a utility. I’ll get to that in a bit.

I’ve taken on a role as Editor of redefinED and I have been asked to introduce myself, which is not something I’m accustomed to or comfortable in doing. Bear with me.

Like a former Florida governor, I was raised by a proper Episcopalian family in southeast Texas in the late 20th Century. Also like this governor, I graduated from the University of Texas at Austin – he in 1978, me in 1990. The similarities trail off after that, however. Gov. Bush went off to a grandly successful career in politics, while I went on to study political science and became an obscure policy nerd, err wonk, no I mean analyst. Our family eventually moved from Texas to Arizona, where I happily remain today.

Random chance led me to an interest in K-12 reform in Florida. As an analyst at the Goldwater Institute, I was engaged in a debate about whether reformers should push choice-based reform or standards/testing-based reforms. At the time there seemed to be an easy answer to me – yes please. I remember thinking to myself, “If choice and transparency really are two great tastes that taste great together, I should be able to demonstrate that somewhere – but where?”

Gov. Bush had relentlessly pursued both a standardized testing system and school grades and K-12 opportunity policies like charter schools, virtual learning and school vouchers. I decided to take a close look at Florida’s scores on the Nation’s Report Card (aka NAEP) to see if there was evidence of forward momentum. I was familiar with Arizona’s scores, and blinked and double checked as I found Florida’s minority students outscoring the statewide averages for all students in Arizona at the time. Looking around a bit more led to the realization that Arizona was far from alone.

Arizona of that time did not score well on NAEP, and worse still had developed what I regarded as complacency – something along the lines of if you control for demographics we are kind of average! Subsequently I’ve discovered that most states have a story like this – about how their state is the one with the tough to educate kids. The story in Arizona involved kids coming across the border unable to read Spanish, much less English, yadda yadda etc. In Minnesota, the story involves Hmong students from what I can gather. Close your eyes and I’ll bet you can recall a version of this story from whatever state you’ve lived in.

This is a myth of the self-defeating sort; this story deserves our respectful critique and ultimate rejection. If State X has the tough to educate kids and you know honestly can’t do anything with them then why do we have a public education system at all? In real life you don’t get to “control for demographics.” You either educate the kids that show up in your schools, or you don’t.

The fact Hispanic Floridians were reading about a grade level above the average Arizona student at the time became a useful data point in a personal campaign against Arizona complacency. A victory in that (still ongoing) war came a few years later when Gov. Bush visited Arizona and testified to a joint meeting of the House and Senate education committees. Arizona adopted several of Florida’s reforms – including school grades and funding incentives. One cannot draw any firm conclusions between policy and outcomes but I will note for the record that the Nation’s Report Card has given six state level exams since 2009 (4th and 8th grade math, reading and science) and Arizona is one of only two states to show statistically significant gains in all six. Not bad considering that the Great Recession drop kicked our state’s economy with a steel toed boot. We drew a lot of inspiration from Florida.

I had the opportunity to become a bit of a minor K-12 de Tocqueville to Florida during this period. As it turned out, Florida had not peered deeply into its own academic gains, and was not aware of things like this from the 2009 4th grade reading NAEP: 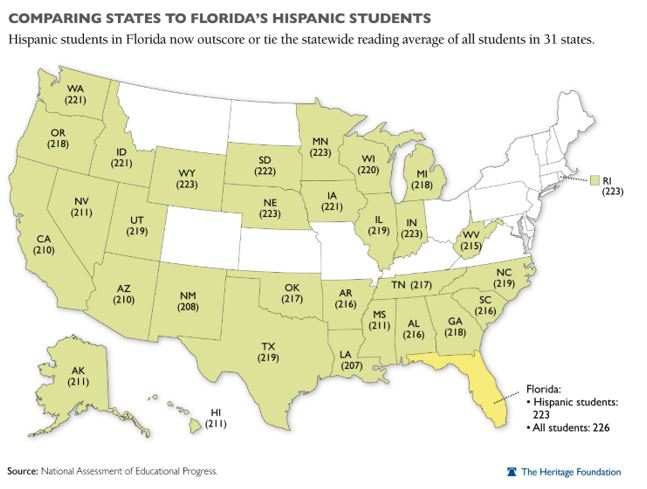 Which isn’t kind of cool but rather genuinely awesome – an accomplishment in which Florida students, educators and policymakers should take abundant pride. Florida Hispanic students tied Wyoming in a reading exam written in English – take that edu-fatalism! My role in this great feat was exactly zero – other than to note the scale of Florida’s success from a useful distance.

Later I went on to be a part of the original Arizona team that developed Education Savings Accounts (I’ll provide a Marvel-comics-like origin story post at some point); served for five years with Gov. Bush’s team at Excel in Ed; and then most recently worked at the Charles Koch Institute, helping to develop an organizational point of view on K-12. Most recently, I’ve joined the team at the Arizona Chamber of Commerce and Industry, champions of educational improvement in my state, and become editor here at redefinED.

Just over a decade has passed since I first squinted at my screen wondering if there was some sort of mistake in Florida’s NAEP scores. I’m certainly older and grayer, hopefully wiser and still retaining an outsider’s eye. Orwell said that to understand London, one needs to live in Paris. Likewise it took a Frenchman to recognize the true greatness of American democracy. Every Floridian reading this post knows a great deal more about Florida than I do; my only advantage is one of a perspective enhanced by distance.

Florida is a grandly innovative state with a record in policy implementation that is far greater than average. It’s very hard to appreciate this when you are close to your own inevitable policy and political messiness, but trust me, it is very clear from over here. I’m proud, for instance, that Arizona originated both scholarship tax credits and education savings accounts. Both innovations have been successfully taken to greater scale, however, in Florida – in no small part due to the relentless attention paid to the details of implementation.

You’ve taken crucial first steps towards equalizing opportunity in schooling. The sky not only did not open with a rain of frogs or locusts, you’ve seen real tangible progress. Florida public education, despite much protestation from traditionalists, is not only still there, it is substantially improved.

Funding for public education is guaranteed in the Florida Constitution and is as close to a permanent institution as you get in American society. It’s here to stay. Florida, however, has the chance not just to practice the form of public education, but to fulfill its actual promise. Much divides our society, but Americans still unite on crucial issues, including education. We desperately want an education system that gives students the knowledge, skills and habits needed for success and to responsibly exercise democratic citizenship. We – left, right and center – commonly and fiercely desire a system of schooling which serves as an engine of class mobility. Florida has moved the needle in this direction by setting families free to pursue opportunities that would otherwise be denied to them. More of this is needed and the next step will be to develop a consensus around setting educators free as well.

More on that later.

Grim challenges lay ahead for Florida. I’ll lay out the latest on some of them in coming posts. We should never, however, make the mistake of underestimating human ingenuity – and especially of betting against a wildly inventive state in the world’s most creative nation. Your challenges will be great, but you have been more than equal to them thus far.

Go and amaze us. Where Florida leads, others will follow.