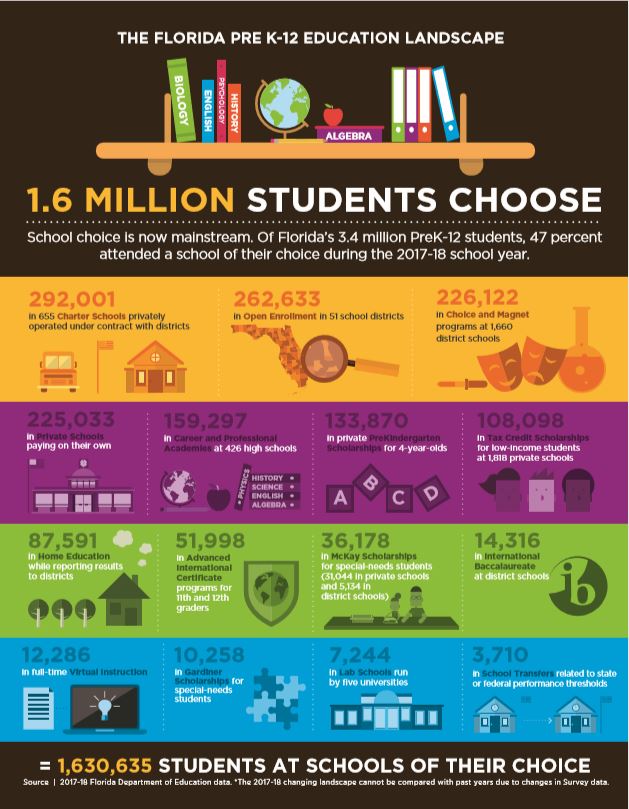 Charter schools overtook “Choice and Magnet programs” and “Open Enrollment” to become the most popular school of choice for Florida parents in 2017-18. The annual Changing Landscapes document above shows 1.63 million preK-12 students, or 47.1 percent of the 3.46 million students statewide, opted for schools outside their zoned neighborhood school.

Charters took the No. 1 spot thanks in part to an increase of 12,081 students, but also because of a 58,499 student decline in “Choice and Magnet” programs.

Polk County accounted for the decline, and then some, in the “Choice and Magnet” programs category with a decrease of 61,036 students. It is unclear what happened with this enrollment figure in Polk. A spokesman from Polk County Public Schools stated that Magnet School enrollment increased from 9,809 in 206-17 to 10,912 in 2017-18 and did not experience a 60,000 student decline in enrollment as statewide survey data initially suggested. The spokesman was unable to confirm whether the initial results were due to a clerical error or a reclassification of students since the individual who previously reported Polk enrollment figures to the Florida Department of Education has retired.*

The FLDOE reported data through “Survey 2,” which is conducted earlier in the school year. According to a department spokesman, using “Survey 2” instead of the end-of-year “Survey 5” reduces the number of duplicated students in choice options. For example, “Survey 5” might count a student enrolled in both a charter school and an open-enrollment public school if the student transferred schools during the year.

Additionally, thanks to better data collection methods, Step Up For Students (which cohosts this blog and administers the Florida Tax Credit Scholarship and Gardiner Scholarship programs) is now better able to track whether Gardiner Students enroll full time as private school students or homeschool students. This enabled us to remove duplicates from both categories this year.

The Changing Landscapes document is in its ninth year. Data for this report is gathered by the FLDOE and includes statistics provided by local school districts.

*Editor’s Note: Updated to note the Polk County response. A spokesman for the Florida Department of education also speculated the discrepancy could be due to a clerical error or a reclassification of students from one educational option to another within Polk County.