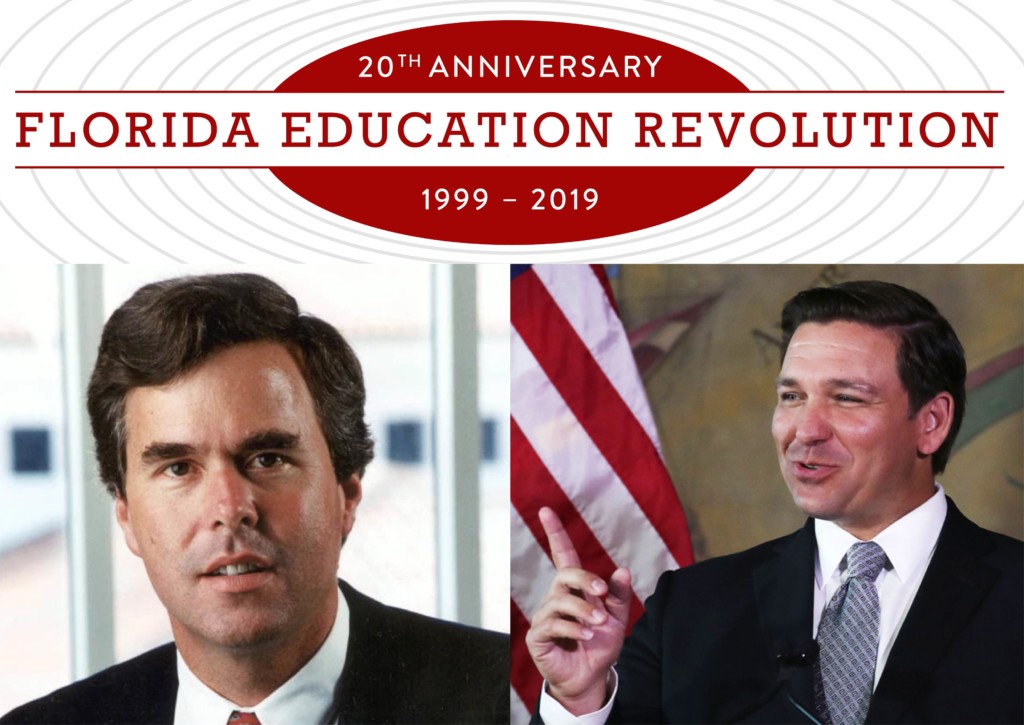 Editor’s note: March 2 marked the 20th anniversary of the legislative session in which Florida Gov. Jeb Bush launched a series of K-12 reforms that transformed education throughout the state. (No, I can’t believe it’s been 20 years either.) Beginning today, as the 2019 Florida legislative session is set to open, and continuing for several months, redefinED will examine aspects of Bush’s K-12 education revolution.

It was 20 years ago today

They’ve been going in and out of style

But they’re guaranteed to get sued at trial

So may I introduce to you

The act you’ve known for all these years

The Florida Education Association hated the reform measures so much that its members infamously took out a second mortgage on their Tallahassee headquarters to donate to Bush’s opponent’s campaign. Nevertheless, the recent Florida Supreme Court school finance ruling and a chart from a Stanford-based academic make a very powerful case for just how misguided reform critics have been – and alas, remain to this day.

Before diving into the Florida Supreme Court’s ruling in Citizens for Strong Schools vs. Florida State Board let’s note from the outset that people have varying and deeply held preferences on school funding. There’s nothing wrong with wanting to spend more; lots of folks do. Lawmakers, however, must balance this desire against the desire to spend funds on competing demands for priorities such as heath care, higher education, transportation, criminal justice etc., and within a context of preferred overall levels of taxation. This, in short, is how democracy works. In Citizens a group of petitioners sued the state to have the courts take over education budgeting. After a decade of proceedings, the Florida Supreme Court ruled against the petitioners:

Moreover, Petitioners’ argument flies in the face of the trial court’s detailed findings, none of which Petitioners challenge for lacking a basis in the record. As just a few examples, the trial court found that: “Florida has been a national leader in education reform”; Florida intentionally adopted rigorous standards and set cut scores at a level that places the majority of students below the satisfactory level; scoring a “Level 1 or 2” on the assessment “is not an indication that a student ‘can’t read’ or is illiterate”; the State’s “high performance standards . . . have led to improvement over time”; and Florida “has outpaced the nation in closing” achievement and performance gaps that “exist throughout the country.”

Translation: The trial court made detailed findings that Florida public schools have improved that the petitioners entirely ignored, and this is a large problem for a case urging the courts to take over school budgeting.

The next paragraph is also quite revealing:

While Petitioners’ proposed standard is problematic in and of itself, Petitioners’ own pleadings expose the flaws in their arguments and highlight why Coalition requires that we approve the result reached by the First District. Indeed, what Petitioners seek is for the courts to order Respondents “to establish a remedial plan that . . . includes necessary studies to determine what resources and standards are necessary to provide a high-quality education to Florida students.” (Emphasis added.) In other words, Petitioners do not know what a “high quality system” looks like, how it can be achieved, or what resources and standards are necessary. Instead, they—and presumably the courts—will know an “efficient” and “high quality” system, as well as an “adequate” level of overall funding, when they see a study that shows what it is. Petitioners invite this Court to not only intrude into the Legislature’s appropriations power, see Coalition, 680 So. 2d at 407 (“[P]resumably the Plaintiffs would expect the Court to evaluate, and either affirm or set aside, future appropriations decisions . . . .”), but to inject itself into education policy making and oversight. We decline the invitation for the courts to overstep their bounds.

Translation: the majority was unwilling to suspend normal democracy on K-12 budgeting to begin a process of trying to figure out what to do as an alternative.

Even if we were inclined to accept all of Petitioners’ arguments regarding justiciability and separation of powers, on the record presented here Petitioners still could not prevail. At bottom, Petitioners’ blanket challenge to the educational system is a funding challenge, one rooted in the notion that the Legislature is not providing an adequate overall level of funding and that the lack of funding has resulted in disproportionate outcomes for certain students. That is clear from Petitioners’ allegations, Petitioners’ specific request for relief, and the rest of the record. Indeed, the trial court noted, among other things, that “[t]he primary thrust of [Petitioners’] complaint is that there is a crisis . . . caused by the State of Florida’s inadequate funding of education,” that Petitioners “asserted that more resources were clearly needed to address the problems they identified in their – 35 – complaint,” and “that the evidence was focusing on [Petitioners’] ‘need for more resources’ argument.” But the trial court’s express findings doom Petitioners’ funding challenge and theory of the case. Not only did the trial court find that Petitioners “failed to establish any causal relationship between any alleged low student performance and a lack of resources,” but the trial court found that “the weight of the evidence . . . establishes a lack of any causal relationship between additional financial resources and improved student outcomes.” Petitioners’ failure to establish such a causal relationship provides an independent basis for rejection of their claims.

Translation: bitter experience has taught us that it is entirely possible to infuse public school systems with additional resources without realizing improvement in student outcomes of the sort that Florida has in fact seen.

In essence, the court ruled that the improvement the petitioners claim to seek is already underway, that they can’t quantify what it would take to achieve a high-quality system, and that their preferred remedy (large funding increases) would not necessarily result in improvements in student outcomes. The chart below, produced by Stanford, Harvard and University of Munich scholars, plots academic achievement scores by spending per pupil trends: 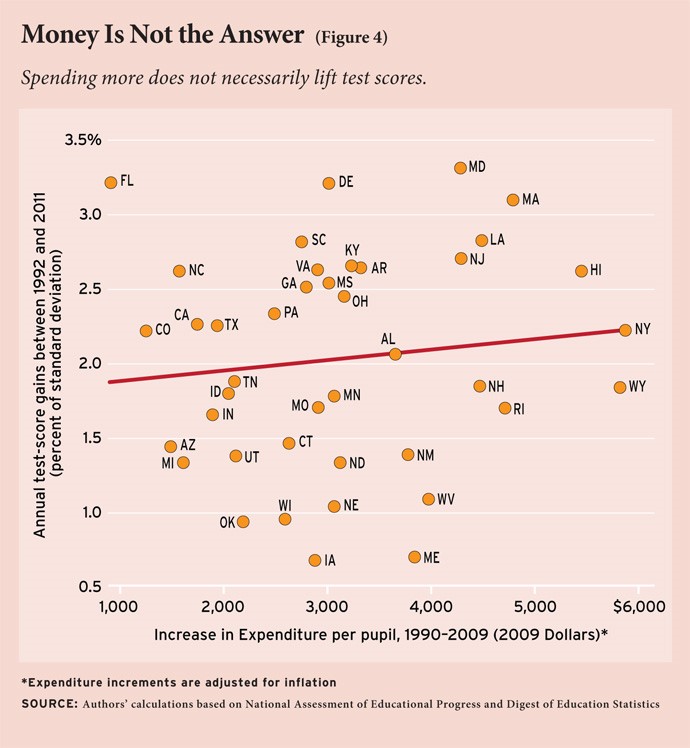 The Florida Constitution states, “Adequate provision shall be made by law for a uniform, efficient, safe, secure, and high-quality system of free public schools that allows students to obtain a high-quality education.” Did New York fulfill this mandate? No. The state increased spending by a huge $6,000 per pupil only to see average academic gains – nothing “efficient” about that, I’m afraid. How about Wyoming? Nope. Once again, there were huge increases in per pupil spending but below-average academic gains for students. The taxpayers of Iowa provided an increase approximately three times larger than Florida, and Maine four times larger. But both states saw academic improvement far less than a third of what Florida’s students achieved.

According to this chart, the state that came closest to providing a uniform, efficient and high-quality system of schools was Florida. The petitioners asked the Florida Supreme Court to take over school funding decisions in order to spend like Maine or Wyoming to achieve the sort of results seen in, ahem, Florida, with modest rather than large increases in per pupil funding. The Florida Supreme Court (wisely, in my opinion) declined.

Gov. Bush’s education reforms aimed to improve student outcomes employing a variety of strategies – including increase in funding – and the available evidence strongly suggests that in tandem, these reforms succeeded in raising achievement, particularly among historically low performing student subgroups. Florida’s taxpayers shouldn’t be surprised that many folks in the education system – those who deserve national recognition for their success – would like to have greater resources. Everyone wants more resources, but those resources are scarce. Public funds are budgeted democratically, and this chart makes it easy to see where the budgetary priorities have been. 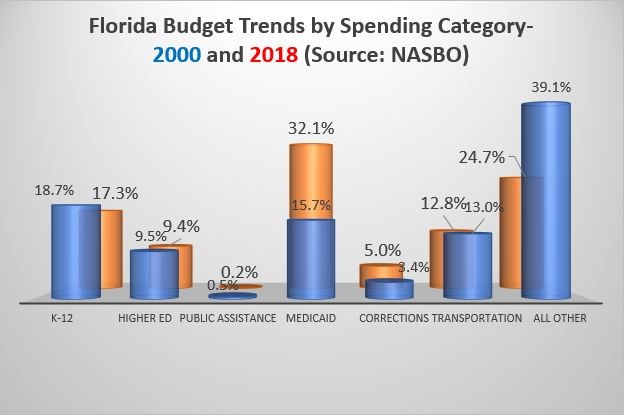 It’s very difficult to imagine large increases in K-12 funding while more than doubling health care spending, even with the federal government picking up half the tab. People care deeply about all kinds of spending in the “All Other” category, and Florida lawmakers have shielded K-12 from Hurricane Medicaid better than most. The potential funds for a Wyoming style surge in K-12 spending, which didn’t do Wyoming students any apparent good by the way, went to pay for health care. The school lobby doesn’t have to like this decision, but both the decision to seek what amount to efficiency gains (more bang for the education buck) and to focus state resources on health care were decided democratically. In other words, not everyone has to like the decisions, but they nevertheless were legitimate.

Lawmakers, moreover, have a moral and in Florida, a constitutional duty to seek an efficient system of schools that maximizes return on investment. Globally, the United States is a very high-spending country with catastrophically poor results for minority students on international exams. The international PISA exams show, for instance, that American Black and Hispanic students score closer to the average scores in Mexico than they do to students in Europe, Asia or indeed to American Anglo students.

Mexico spends but a fraction of what American schools spend in per pupil spending and faces far greater poverty challenges than those in the United States. People can differ on whether to spend more in the United States, but we must close these shamefully low levels of achievement – and that involves getting more out of our already enormous investment.

William Faulkner wrote that the past is never dead, it’s not even past. The health care budgetary pressures are set to accelerate due to the aging of our already elderly population. Nevertheless, Florida policies can empower educators to provide highly appealing school models at reasonable costs in a way that will attract and retain high-capacity teachers and include disadvantaged students. This is mutually beneficial to teachers, parents, students and taxpayers, and is improving and evolving over time through a decentralized process of voluntary exchange. If this process can continue, the best is yet to come in Florida K-12 education.

Florida not only needs to continue this good work on K-12, it needs a leader as effective and fearless as Jeb Bush was on K-12 reform to radically improve the effectiveness of heath care spending, as another couple of decades like the last two threaten to squeeze out other vital priorities.

Gov. Bush and his team took a sad song (the Florida K-12 system of 1999) and made it better. This task now falls to a younger generation of leaders, and most importantly, to you.