I had the opportunity recently to visit a new, small private school on the San Carlos Apache Reservation in Arizona. The school illustrates an education trend that is providing a new avenue for addressing America’s largest achievement gap.

The United States has done very poorly by Native Americans, including but hardly limited to K-12 education. Starting in the late 19th century, a group of “Indian Schools” was established. Authorities forcibly separated families and attempted to forcibly assimilate students, even beating them for speaking their native language. In addition to being barbaric and illiberal, these and other federal efforts have left Native American students with the largest achievement gap in the country.

The opposite of foreigners creating schools and forcing children to attend them is to have the community create its own schools and give families the opportunity to enroll. Arizona’s suite of charter and private choice policies has been expanding these opportunities over the years, and there has been progress. 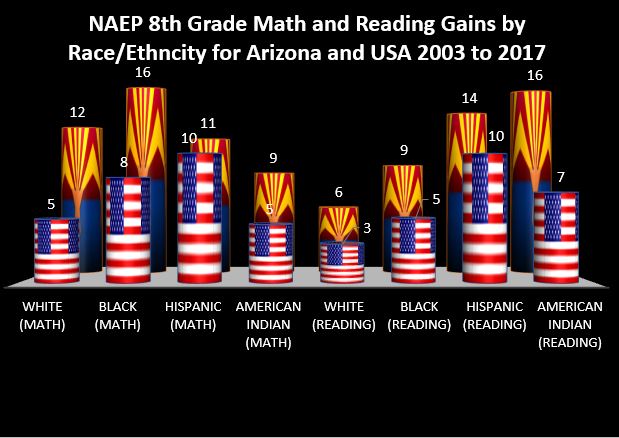 As the chart above shows, Arizona has been making greater academic progress across all student subgroups than the national average, including with Native American students. The challenges, however, remain daunting. Many reservation areas are rural and remote, making it difficult to launch and maintain charter schools. All Arizona racial/ethnic subgroups scored equal to or above the national average on eighth-grade math and reading in 2017 except Native American students. Despite the gains, these students have yet to catch up to their peers nationally, much less to those peers’ Anglo averages.

A new school on the Apache Nation, however, points to a new hope. A Democratic senator from Arizona’s Navajo Nation pushed legislation through years ago making residents of Arizona reservations eligible to receive an Empowerment Scholarship. In January 2019, a small group of these students began participating and created a new private school.

Hadassah John, the school’s teacher, attended Apache reservation schools. She became inspired to start a new school because public schools in the area were low-performing, and her students experienced bullying and a lack of academic challenge. The local school district spends well above the Arizona state average but earned a letter grade of F from the state. Parent reviews, and even a teacher review, on the Great Schools site are scathing. John felt the community needed an alternative.

“I believe a child cannot learn if, one, they do not feel safe; and two, if they are not understood. This alternative offers each child (a chance) to learn at their own pace. They do not have to feel insecure or inferior to the student sitting next to them,” John noted.

Students at John’s schools focus on hands-on projects. On the day of my tour, a visiting Stanford graduate student was assisting them with designing and printing 3-D objects. They obviously were having fun.

John, who runs the school from a church campus, has raised $5,000 to purchase supplies and technology. She hopes to add a second class of students in the fall, and despite many obstacles, may be on the forefront of a new teacher-led model of education.

In her words: “If there is no joy in what you do or believe, it is harder to carry with you. There are a lot of challenges I have faced since Day 1. I have used each challenge thrown at us as a brick to help build a bridge for students to cross from hopelessness over to success and education.”

When I shared with John that I recently heard a 44-year veteran teacher relate on a radio program that “the joy has been strangled out of the profession,” and that the problem in education is not a lack of money, she responded with a quote from Albert Einstein: “It is the supreme art of the teacher to awaken joy in creative expression and knowledge.”

From what I saw during my visit, it looks like joy is fully awake at this new school.