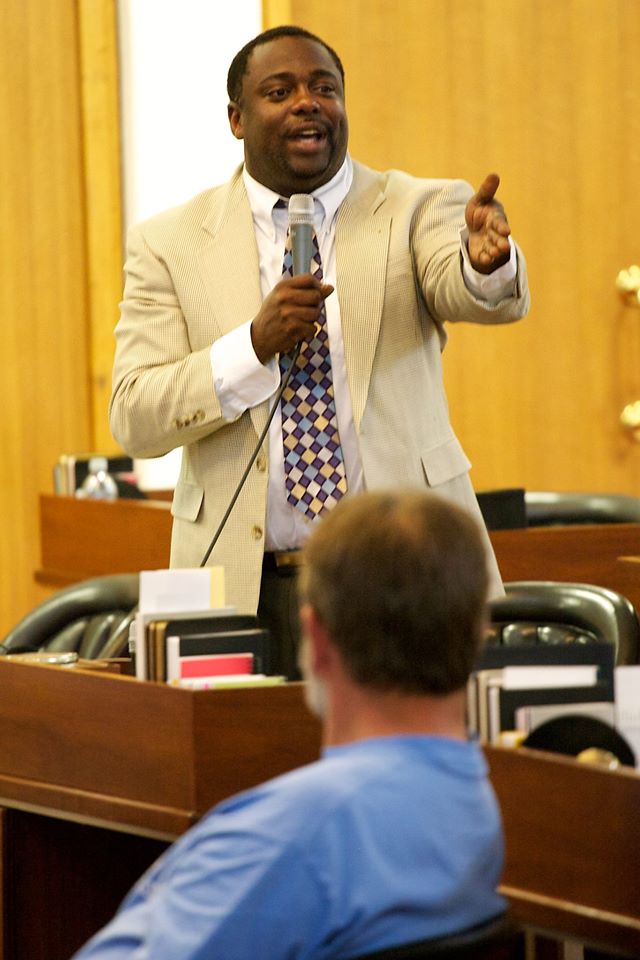 Editor’s note: Each Saturday in November, redefinED is reprising a podcast from our archives, reminding readers that we have a wealth of audio content to complement our written blog posts. Today, we revisit a September 2015 interview with a voucher advocate who has fought for the educational rights of disabled and low-income students.

Marcus Brandon’s resume starts off like a progressive’s dream.

National finance director, Dennis Kucinich for president. Staffer, Progressive Majority. Deputy director, Equality Virginia. But once it rolls into Brandon’s education accomplishments, some fellow progressives get whiplash. During two terms in the North Carolina House of Representatives, Brandon was a leading force behind bills that created vouchers for disabled and low-income students, and removed the state’s cap on charter schools.

Inconsistency? Not for Brandon, a rising political star whose family’s civil rights bona fides are unquestioned.

“I tell people that my views on education are the most progressive stance that I have,” Brandon told redefinED. “Progressives have to take a real hard look at the way they view education because I’ve always been brought up, in the civil rights movement and all of that, (to) fight for equal opportunity and equal access for everybody.”

Brandon, who now directs the Carolina CAN education advocacy group, isn’t an anomaly. A growing list of influential liberals, progressives and Democrats are increasingly supportive of school choice. In the process, they’re wrenching the left back into alignment with its own forgotten history – a history that is especially rich in the African-American experience.

Milton Friedman would merit a few paragraphs in a book on this subject. But there’d be whole chapters devoted to the educational endeavors of freed slaves and black churches. To Mississippi freedom schools and Marva Collins. To the connections between Brown v. Board of Education and Zelman v. Simmons-Harris.

The evidence is in plain sight. A who’s who of black Democrats have explained their support for school choice in many ways, in many forums (see here, here, and here for starters). Progressives who are still skeptical should consider James Forman Jr.’s paper, “The Secret History of School Choice: How Progressives Got There First.” Or check out the annual gathering of the Black Alliance for Educational Options. Or look at the polling, which shows deep support for school choice in black communities.

Better yet, they should pause and consider the pleas of black parents.

In the meantime, they should hear out one of their own. (A podcast with Brandon is included below.)

Brandon’s support for vouchers and charter schools led fellow progressives to threaten to run him out of office, and worse. (Those kinds of attacks on black choice supporters aren’t an anomaly either.

Consider hit pieces like this one. And headlines like this.) What they should have done instead, he suggested, was consider choice on its merits – and the hypocrisy of many choice critics.

“I remember being in a parade one time, and one progressive yelled at me, ‘You’re privatizing schools.’ And I asked her, ‘Would you send your kid to my school?’ And every time I ask that question the conversation gets very silent. And so what African-Americans need to do is understand that. Our leaders need to understand that those that are leading this fight (against school choice) do not send their kids to our school. And so what are we going to do?”

It’s not progressive, he said, to keep looking the other away.

“We’ve allowed these educational outcomes and these policies to go on for 40, 50 years, and then we say we’re going to continue that and someone says that’s progressive,” Brandon said. “If you have data that shows consistently that there is one particular segment of the population that doesn’t do well under a system, well that’s not progressive.”