While last week’s NAEP news was glum nationwide, Mississippi students performed relatively well. You have to dig into the details to see just how well.

First, a bit of backstory.

Mississippi is one of the nation’s poorest states and has the largest African-American student population in the country. The state has ranked at or near the bottom on NAEP scores for many years. Over the past decade, policymakers have adopted several K-12 policies familiar to Floridians: A-F letter grades for schools, a strong emphasis on early literacy, a charter school law and an education savings account program for students with disabilities.

The state’s choice sector went from non-existent to nascent in recent years, although it’s not yet at a scale where it can play more than a complimentary role to the public education system. Yet based on this year’s NAEP, as seen in this crosstab of student race/ethnicity on fourth-grade reading, something seems to have gone very right. 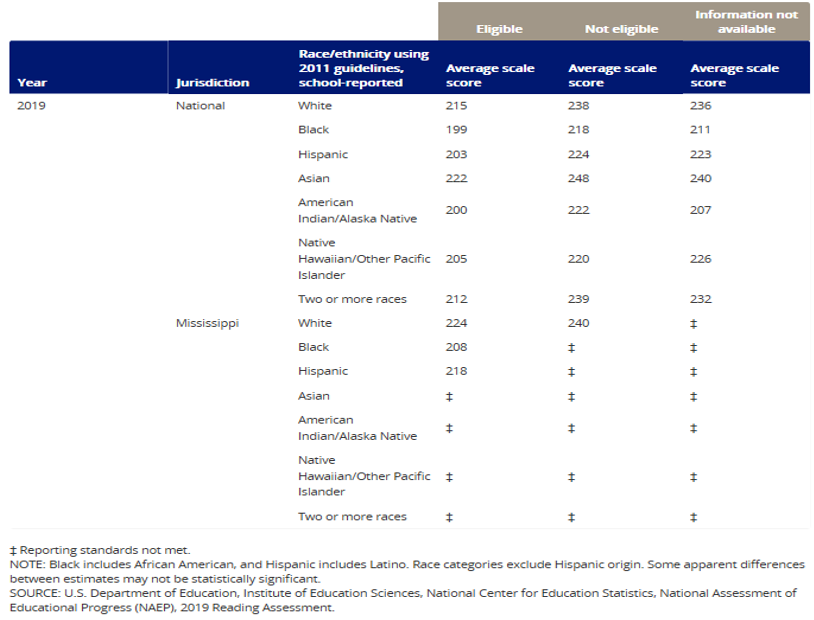 Meanwhile, Mississippi black students who do not qualify for free and reduced-price meals (middle to high income) outscored their peers nationwide by 22 points.

NAEP allows comparisons not just between states, but also between states and regions. So, here are the trends for fourth-grade reading broken down by student free and reduced-price meal eligibility status.

Back in 2009, students in Northeastern states in both low-income and middle/high income categories were well ahead of that cohort in Mississippi, but in 2019, Mississippi led among low-income students and tied among non-eligible free and reduced-price meal students. Mississippi students progressed from being well behind students in Northeastern states to being virtually tied in both categories on eighth-grade reading over the past decade.

As a relatively late adopter of reform efforts, Mississippi had the chance to learn from earlier successes and earlier mistakes. Alas, there have been more of the latter than the former.

Massachusetts began its reform efforts in 1993 and had the highest scores on all four NAEP exams until 2019. Florida’s scores surged after 1998 with a different, but also multi-faceted set of reforms. Arizona students were unique in achieving statistically significant gains on all six NAEP exams between 2009 and 2015, and Mississippi joined Arizona in that category in 2017.

Initial success does not guarantee sustained success, but for now, Mississippi leads in the academic improvement clubhouse. I hope it continues its success – and that the rest of us can give the state some competition.