Percentage distribution of students age 5 through 17 attending kindergarten through 12th grade by school type, 1999 and 2016

The percentage of students accessing schools of choice has increased dramatically over the past 30 years, with growth coming from the expansion of both public and private school choice options, according to a new report from the Council of Economic Advisers.

Among the findings of the council, an agency within the Executive Office of the President charged with offering the President objective economic advice on the formulation of domestic and international economic policy:

Private school scholarships have grown considerably, but still make up a small portion of the K-12 student population, with 539,000 students utilizing tax-credit scholarships, vouchers or education savings accounts to enroll in private schools. 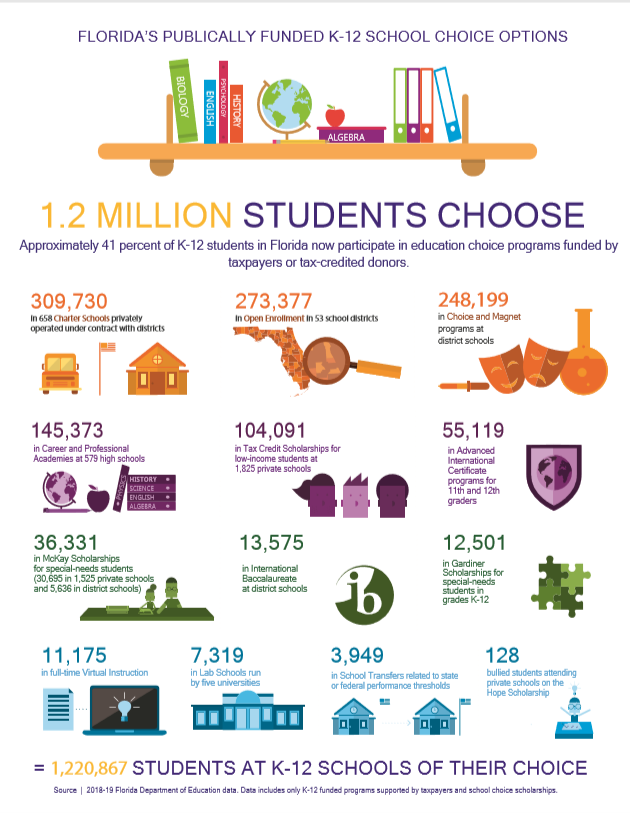 The report’s authors conclude that expanding choice options could help low-income and minority students. Florida already is a national leader on that front, with 41% of students attending schools of choice in 2018-19, the latest data available.

The state’s most popular options include charter schools, open enrollment, magnet schools and career academies enrolling more than 600,000 students, about half of all choice students in the state. By comparison, only about 152,000 students utilized scholarships to attend private schools in Florida.