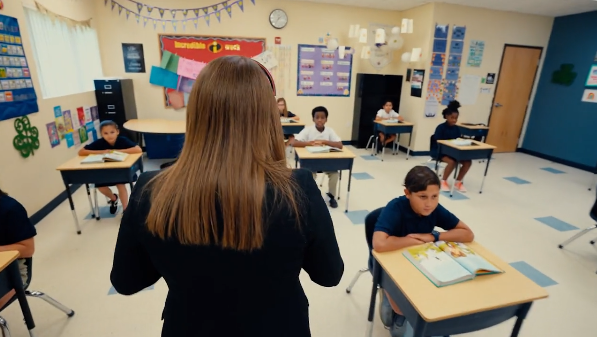 Editor’s note: This commentary from Jude Schwallbach, research associate and project coordinator at The Heritage Foundation, originally appeared in The Daily Signal.

National School Choice Week has taken on renewed importance this year, as too many families are approaching the one-year mark of crisis online learning provided by their public school district.

Last March, the coronavirus pandemic shuttered schools nationwide, forcing teachers, parents, and students to transition to virtual classrooms and grapple with the various effects of lockdowns. Ten months later, parents report that 53% of K-12 students are still learning in their virtual classrooms.

Recent research by the Centers for Disease Control and Prevention indicated that in-person learning is rarely a source of large outbreak. Even though in-person learning is one of the safest activities for children, proposals to reopen district schools for face-to-face learning have met with staunch opposition from teachers’ unions.

Inexplicably, teachers unions have also rejected measures which would require teachers to be more available to students throughout the day via live video.

The Center on Reinventing Public Education’s director, Robin Lake, told the New York Times that the teachers unions’ vacillating responses feel “like we are treating kids as pawns in this game.”

Adding to parents’ frustrations, teachers unions have also taken the opportunity to push for a whole host of concessions that have nothing to do with health safety.

For instance, the American Federation of Teachers has a long list of demands, including: additional food programs, guidance counselors, smaller classes, tutors to assist teachers, and “culturally responsive practices.”

Similarly, The United Teachers of Los Angeles has demanded a moratorium on charter schools, higher taxes for the wealthy, and “Medicare for All.”

The blatant, non-pandemic-related demands of many teachers unions have illustrated what Stanford University professor Terry Moe noted a decade ago: “This is a school system organized for the benefit of the people who work in it, not for the kids they are expected to teach.”

The inflexibility of teachers unions has increasingly become a source of escalating tension with local officials. For example, Chicago Public Schools, the third largest school district in the nation, locked teachers out of their virtual classrooms after they refused to return to in-person instruction with classrooms at less than 20% capacity.

Such unbending posture has provoked the ire of parents and left many children frustrated, both academically and socially. As Tim Carne wrote in the Washington Examiner, “The very people who have most loudly declared the importance of public schools now are deliberately destroying public schools.”

Many parents are tired of being strong-armed by teachers unions and have pursued alternative education options for their children.

For instance, the learning pod phenomenon, wherein parents work together to pool resources and hire their own tutors and materials is popular. This allows students to return to in-person lessons, even if school districts refuse to reopen.

Last September, a national poll by the pro-school choice nonprofit EdChoice indicated that 18% of surveyed parents were looking to join one. At the same time, 70% of surveyed teachers reported interest in teaching in a pod.

Families have embraced private school options, too. A survey last November of 160 schools in 15 states and Washington, D.C., showed that half of the surveyed private schools experienced higher enrollment this academic year than they had the previous year pre-pandemic.

Moreover, more than 75% of surveyed private schools were open for in-person instruction. The remaining schools offered hybrid education, which is a combination of in-person and virtual learning.

National School Choice Week is an important reminder that “public education” means education available to the public, regardless of the type of school it takes place in. It is the perfect time to remember that parents, not teachers unions, are best positioned to determine the education needs of children.

School choice options like education savings accounts can bring education consistency to families across the country during a most uncertain time. National School Choice Week is an important reminder of that.