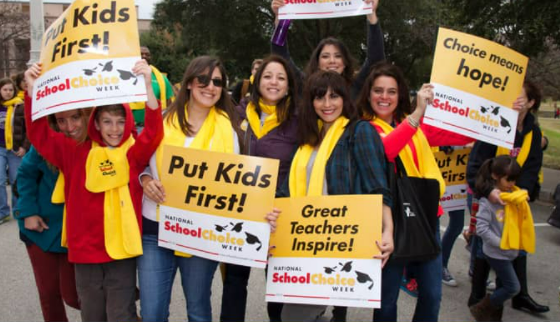 Editor’s note: This report from the organizers of National School Choice Week found that nearly 52% of parents in the United States have considered, or are considering, finding new schools for their children.

Frustrated by COVID disruptions to their children’s schooling and seeking higher-quality education environments, nearly 14% of U.S. parents are currently considering finding new or different schools for their children, according to the results of a national survey released Monday by National School Choice Week.

An additional 38% of parents reported that within the past year, they chose a new school for at least one of the children in their home or considered doing so. In total, 51.7% of parents considered or are considering new schools for their children.

Notably, 62% of Black parents and 59% of Hispanic or Latino parents indicated that they considered or are considering new schools, compared with 47% of white parents.

The census-balanced survey of 2,715 parents of school-aged children aged 5-18, conducted January 3-6, 2022, indicated intense parent interest in school choice, which is the process of families searching for and choosing the traditional public, charter, magnet, private, online, or home learning environments that best meet the needs of their children.

Among the 48.3% of U.S. parents who are not considering new schools or did not within the past year choose or consider new schools, 18% indicated they were likely to start the process of searching for new schools for their children in advance of the 2022-2023 school year.

Thirty-six percent of parents reported that at least one primary reason for considering a new school was the “desire for a higher quality education” for their child(ren). Thirty-four percent said they considered new schools because “the pandemic and/or school COVID policies disrupted my child’s education.” Twenty-six percent of parents were “concern[ed] about school safety or bullying.”

“For an increasing number of U.S. families, school choice is a necessity, as moms and dads search for learning environments where their children can best learn, thrive, succeed, and be happy,” said Shelby Doyle, vice president of public awareness for National School Choice Week.

“Parents in many places have more school choice options today than at any time in history, and they are taking the initiative to find the right fit for their children. We encourage parents who want to look for new or different schools for next school year to start the school search process in January to make sure they have enough time to evaluate all of their options. Raising equal awareness about the traditional public, charter, magnet, private, online, and home-schooling options for families is the goal of National School Choice Week.”

Parents can learn more about the school choice options during the annual celebration of National School Choice Week, which begins on January 23, 2022, or by using NSCW’s free online resources for parents, which are available year-round at schoolchoiceweek.com.

In addition to developing and providing the nation’s largest year-round portfolio of free school search resources for families, NSCW collaborates with more than 26,000 schools, homeschool groups, and community organizations to plan positive, awareness-raising events and activities each January.