Sparking the evolution of education choice
Arizona Gov. Doug Ducey wraps up his final legislative session with victories on multiple fronts, not the least of which is to reclaim Arizona’s status as the top state for K-12 choice.

The state’s lawmakers expanded eligibility for the Empowerment Scholarship Account program to all students in the state at the conclusion of the 2022 legislative session. Previously, approximately one-quarter of Arizona students were eligible to participate.

Also during the 2022 session, the Arizona Legislature substantially increased K-12 funding for public schools, and by a two-thirds vote, suspended an aggregate expenditure limit that would have prevented districts from spending money already in their possession.

The usual suspects will decry this session as “destroying Arizona public education” but actually what it represents is the next logical step in an experiment in education freedom.

It is well worth noting that a great many indicators demonstrate that Arizona’s experiment with giving educators the opportunity to open new schools and in offering families the opportunity to choose among them was going quite well before the pandemic. I don’t think Arizona would be willing to trade places with any other state on the academic growth of Black and Hispanic students shown between 2008 and 2018: 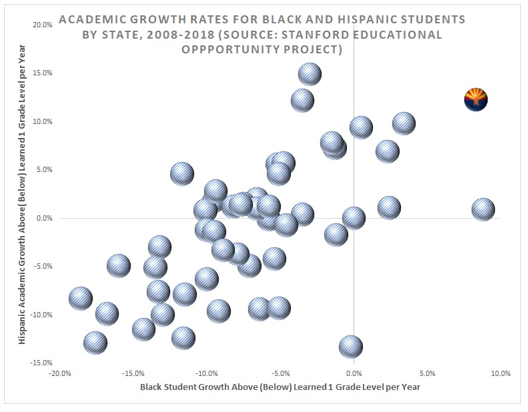 Arizona already has three universal education programs: school districts (which receive the highest amount of spending per pupil on average), charter schools (which educate a higher percentage of students than in any other state); and the original scholarship tax credit program. Arizona’s other choice programs are either means-tested or like the ESA program have served special student populations.

The Empowerment Scholarship Account program is funded on a formulaic basis like districts and charter schools, and thus could become larger than the tax credit programs over time.

Much wrangling is sure to follow. Assuming the expansion survives the attacks of opponents, I can safely predict the following:

Arizona public schools are not going anywhere. Their funding is guaranteed in the Arizona Constitution, their level of funding is already at a historic high, and will go higher still.

No “mass exodus” of students will occur out of Arizona’s other three other education models with universal eligibility. There are about 1.2 million public school students in Arizona, and the last survey of private schools that I am aware of found 26,000 available private school seats. That’s about 2.1% of students for those scoring at home.

Parental demand for private education, or possible lack thereof, will continue to shape the K-12 space in Arizona.

The Empowerment Scholarship Account program, of course, has many uses other than private school tuition, so we’ll have to see how things develop. As for learning pods, thousands of adventurous parents and educators already have found a way to “pod up” with students accessing public funding.

In other words, what is the funded eligibility of the program? This law will provide every student in Arizona a new education option and will be there if their families conclude they need it.

That is as it should be. All Arizona families pay their taxes, all deserve access to every K-12 program.

An education tool with the flexibility of the ESA creates new opportunities for teachers, families, and students. Arizona educators took their previous set of tools, and in a slow but steady process of co-creation, shaped a K-12 system with the amazing potential for expansion and replication. Parents demanded more of some schools, and either depopulated or closed others.

The best is yet to come.