Humans nearly drove whales to extinction, but the whales, by happy accident, were saved by American Cold Warriors and a host of others.

The trouble began with the demand for whale oil. Seventy years passed between the drilling of the first oil well in 1859 and the discontinuation of the use of whale oil. If this had progressed even more slowly, the whale population may have not survived the later Soviet war on whales, which only ended because of the fortuitous collapse of the Soviet Union.

The Soviet Union had signed on to international treaties limiting whaling but then created a perverse incentive for the fishing industry to kill whales because catches were judged on weight. For decades, the Soviets slaughtered whales and discarded the carcasses in a ghastly waste.

With the Soviet Union consigned to the dustbin of history, whale populations finally have moved into recovery. Change, even highly desirable change, often moves at a frustrating pace, but it does move with an inevitability.

A similar gradual but inevitable process is underway with public education. 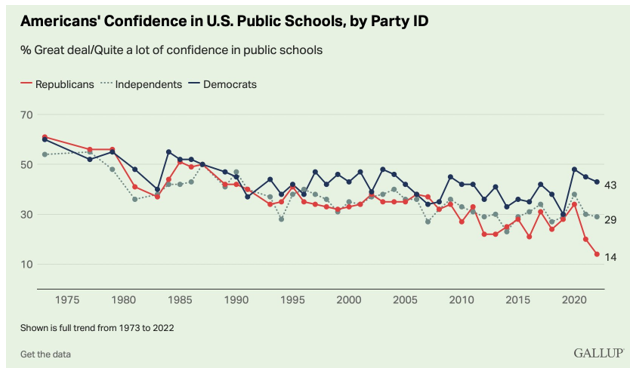 Gallup recently released the poll referenced above showing a record low in public confidence in American public education. As you can see, the last time a majority of respondents from both political parties that expressed either a great deal of confidence or quite a lot of confidence came sometime during the second term of the Reagan administration.

Things have steadily worsened since then, and now a lack of confidence in American public education is a firmly bipartisan position, as illustrated in these photos. 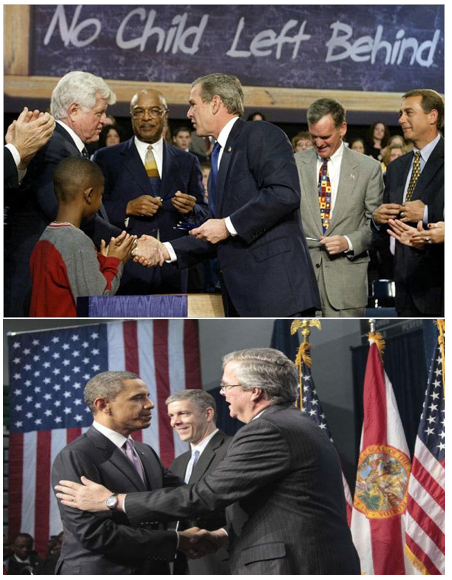 A bipartisan effort to improve American public education ended in failure with inertia serving as the ultimate weapon of those seeking to maintain the status-quo. Between 2009 and 2019, student achievement fell – and that came before the COVID-19 debacle. While there have been bright-spots, broadly speaking, the interests defending America’s K-12 status-quo defeated reformers. Easily.

For a time, an elite consensus between progressives and conservatives attempted to increase abysmal school performance through testing and accountability, and (limited) increases in parental choice. These efforts were well-intentioned, much like the aforementioned international treaty limiting whaling. Also like those efforts, the treaties doubtlessly did some good.

And like those treaties, the “accountability” effort was both naïve and inadequate. While managing better public school performance is possible in theory, in practice it is politically unsustainable for a variety of Political Science 101 type reasons.

So, how do we “save the humans,” you ask? We don’t. Instead, we give people the tools they need to save themselves. We live in unpredicted times.

The Gallup poll referenced above shows that the veil has been lifted from a great many eyes. The regulatory capture of public schools has moved out of the shadows of indifference and into the public consciousness. How can one describe the fact that 20% of African American students are being homeschooled as anything other than a good start?

After decades of “reform,” this is what Black academic proficiency by state looks like according to the Educational Opportunity Project at Stanford University.

The Gospel of John famously related, “You shall know the truth, and the truth will set you free.” A truth to know after decades of effort: America’s decentralized mess of a public-school system with deep regulatory capture at the local level has proved far beyond the ability of even bipartisan efforts to manage.

The best way for American families to reform the public education system is to protect their own children and grandchildren from it. Exit is the most powerful form of voice, and an engine of public school improvement.

Like those who won the Cold War, Americans today can do well by doing good.