Enrollment in Florida’s Catholic schools, which rebounded slightly last year after a pandemic dip in 2020-21, is now the highest it’s been in more than a decade. Figures released this week by the Florida Conference of Catholic Bishops show total enrollment at 88,031, an increase of 4.5% from last year and 3.1% from pre-pandemic numbers.

Billed as the largest expansion of education choice in Florida history, the law merged the state’s two scholarship programs for students with unique abilities and combined them with the Family Empowerment Scholarship program approved in 2019. The law also made it easier for families to qualify by removing the requirement that students must spend the prior year in a district school and expanded eligibility to dependents of active-duty members of the U.S. Armed Forces. Lawmakers followed up in 2022 with laws that granted automatic eligibility to dependents of law enforcement officers regardless of income. 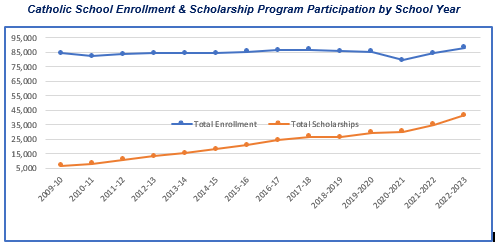